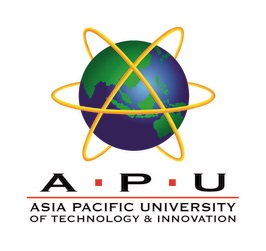 The Asia Pacific University of Technology & Innovation (APU) is amongst Malaysia’s Premier Private Universities, and is where a unique fusion of technology, innovation and creativity works effectively towards preparing graduates for significant roles in business and society globally. APU has earned an enviable reputation as an award-winning University through its achievements in winning a host of prestigious awards at national and international levels.

APU was announced as among the Highest Rated Emerging Universities in Malaysia, being rated at TIER 5 (EXCELLENT) under the SETARA 2011 Ratings by the Ministry of Higher Education (MOHE) and Malaysian Qualifications Agency (MQA), and has maintained this Excellent rating in the SETARA 2013 Ratings and the latest SETARA 2017 Rating. Under the Quacquarelli Symonds (QS) 2017 Ratings, APU was awarded 5-Stars in 4 categories of the QS Stars Ratings – Teaching, Employability, Facilities and Inclusiveness. The QS Stars rating is an international rating system that measures achievements and qualities of universities worldwide. In addition, in 2017, APU was also announced as one of Malaysia’s Premier Digital Institution of Higher Learning (IHL) by the Malaysia Digital Economy Corporation (MDEC), for its commitment in offering top-notch digital technology courses and ensuring highly-skilled graduates continue to flourish and fill future digital job demands locally and globally.

Originally established as the Asia Pacific Institute of Information Technology (APIIT) in 1993 and Asia Pacific University College of Technology & Innovation (UCTI) in 2004, APU’s sound approach to nurturing school leavers into qualified professionals has resulted in our graduates being highly sought after by employers. With an international student community of more than 11,000 students from more than 110 countries studying in its Malaysian campus, APU offers a truly cosmopolitan learning environment which prepares students well for the global challenges which lie ahead. APU offers a wide range of degrees with Technology as a common core. It is APU’s aim to nurture and encourage innovation through our programmes, with the intention of producing individuals who will learn, adapt and think differently in new and better ways.

The Asia Pacific University has and always will, continue to develop and deliver its academic programmes through unique and well-established international partnerships, particularly with Staffordshire University UK but also with other partners throughout the world. This formidable combination of Malaysian homegrown programmes fortified with international benchmarking, provides our students with the assurance that the qualifications gained from APU truly meet international quality standards.

APU’s achievements bear testimony to our commitment to excellence in higher education and training, as well as innovative research and development and commercialization. APU (via APIIT) is Malaysia’s first Institution to achieve Multimedia Super Corridor (MSC) Company Status. Through our network of APIIT Education Group branch campuses established in Sri Lanka and India, APU also reaches out to young aspiring professionals in these countries, providing them with a unique opportunity of experiencing international best practices in higher education using curricula, processes, resources and systems which have been developed in Malaysia. APU’s academic programmes are all approved by the Ministry of Higher Education of Malaysia and the qualifications are accredited or provisionally accredited by the Malaysian Qualifications Agency (MQA).

• Award-Winning Students who regularly win both local and international competitions.

• Engineering Degrees Accredited by Board of Engineers (BEM).