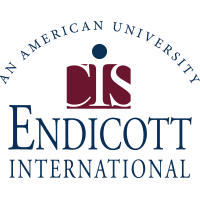 CIS ENDICOTT INTERNATIONAL, an American University founded in 1981, is situated on the very heart of Madrid in one of the loveliest parts of the city. Our building is easly accesible, and in an extremely safe area. We take great pride in offering international students an American Higher education closer to home just as much as we do in offering American precisely what they are used to, only in Spain.

The education method at CIS Endicott Madrid helps students to choose the major that best coincides with their aptitudes, and that remains most consistent with their interest. One of the most significant characteristics of the American Higher Education System is its flexibility. CIS Endicott offers three course cathegories for years one and two, which allow access to a significant number of majors thereafter for years three and four. Upon succesfully completing the four-year program, a bahcelor's degree is awarded to each student in his or her chosen major. The first two years at any American college or university in the world consist of a broad range of general courses. During the last two years, clases are more specific, and correspond with the major chosen by the student. Students acquire and further develop English language, liberal arts, mathematics, and scientific abilities through varied general education courses.